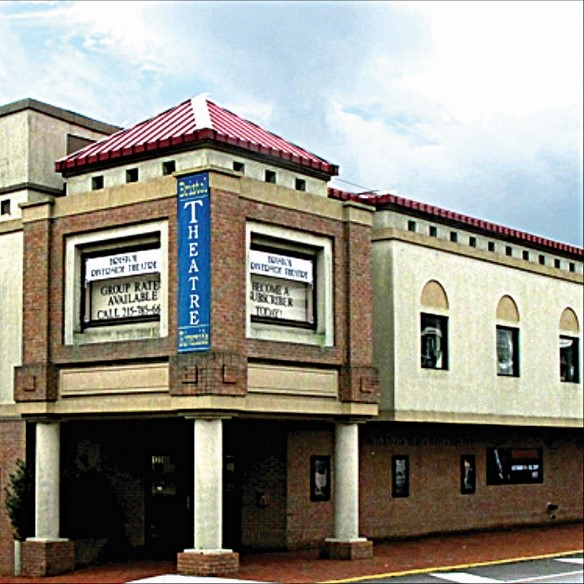 We love the theater. When I was younger Linda and I visited theaters in New York and Philadelphia frequently

Sad to say, we rarely do that anymore. I am older, the trip seems longer, the traffic worse than ever and the trek has become far more expensive. Between gas, tolls and parking you can be out seventy bucks or more before the curtain even goes up. The price of two tickets can equal a mortgage payment. And, pardon my honesty, the cast of “characters” wandering the streets in these two major cities, sometimes resemble science fiction. It really is scary and, at times, can be dangerous.

Now we are going to theater again … often! When we reopened the Pigeon, I headed up to Bristol to solicit ads. I decided it was a great place to start distributing our “reborn” Bird. I have often mentioned that the town has a special place in my heart. I worked in my dad’s store on Mill Street for years until I graduated college. It was, and remains, a nice town.

My dad had a floor covering store and, if I may digress for a moment, I often made deliveries in the store’s paneled truck that had a big sign reading “We Lay Anything.” Need I say any more?

Best of all, I fondly remember my “first experience” as a youth with a “co-operative” young lady in the parking lot behind the shopping area. What can I say? Many years have passed since that memorable experience. As a teenager I dreamed of marrying a nymphomaniac. Now, so many years later, I would prefer a masseur. Oh well, I still enjoy breathing and tap dancing through life… with my cane!

The town is alive again. It has recently won a national small town award (Thank you Bill Pezza!) that came with a sizeable cash infusion. Empty stores are reopening, older ones are freshening up and shoppers are returning. Several new restaurants have been established, a large upscale condo complex is under construction along the water, a major art gallery is now situated on Mill Street and the streets remain spotless and free of graffiti. (Mill Street now has a great train store.) Two new townhouse developments are also springing up in the township.

The town is very easy to reach. It is no more than five or six traffic lights from the Burlington Bristol Bridge to Jersey, several lights from I95 and even closer to the PA Turnpike. Traffic is not a problem. It is also very close to US 1 and US 13. And when you get to town you will find ample free street and off street parking (just watch your meter) which is very conveniently situated for both shoppers and diners. (While you’re shopping on Mill Street stop in at Mignoni’s for anything Irish and some beautiful jewelry.)

Best of all, the town has an incredible theater. The Bristol Riverside Theatre has rescued, salvaged is a better word, a building which had started life as a theater, but evolved into a movie house and later became an adult “art theater” before closing and falling into decay. But now, the Bristol Riverside Theatre has turned into a marvelous showplace of some of the best drama, comedy and musical performances in our greater area. It is THE center piece of the shopping district. It seats about three hundred people in roomy spacious seats that all have excellent visibility. The acoustics are phenomenal and the sets are top notch and imaginative.

It’s an extremely cheerful building with a relaxing color scheme and a marvelous lounge area in the rear of the building which overlooks the Delaware River. Talk about scenery! It also has a nice refreshment stand that serves food and wine. Before I forget, there are several excellent restaurants within steps of their marquee. (Annabellas is directly across the street and a good Mexican restaurant is just down the block.) For those who have hearing problems they offer free broadcasting devices. The volunteer staff is really eager to help.

Simply stated, it’s a top notch facility featuring a variety of productions, very talented performers and musicians, and an excellent support staff. It doesn’t get any better. And, all things being equal … it’s a bargain! It truly is a shining diamond in the heart of Bucks County.

Linda and I were there last week for the opening night of Unforgettable…a Tribute to America’s Greatest Songwriters. I know I often go on and on raving and ranting about different places and things I experience every month, but this was truly SPECTACULAR! The talent, the direction, the musicians, the selections …. I am honestly at a loss. Top notch from A to Z! Both my wife and I, plus our friends Ivan and Sondra, enjoyed it immensely. To coin a new term …. This was Broadway on Radcliffe Street.

When Rebecca Robbins sang Memories I was waiting for the walls to crumble. What a voice.! Keith Spencer, Phil Chaffin and Derrick Cobey also were great. Claudia Pelligrini was unbelievable with her violin. Hell, I could go on and on. The cast was fabulous.

And when the show was over we got a surprise. The Theater provided a wonderful buffet, hosted by a local caterer at no charge. The cast came out and mingled with the audience. Never have I experienced such activity … free parking, free food and wine, a chance to mingle with the cast and a great show for a grand total of less than seventy bucks per couple. Wow!

Linda’s sister-in-law, Eileen Bluestone-Sherman, has won an Emmy. She has had two shows Off-Broadway and is involved in theater in New York City twenty-four seven. Her shows The Odd Potato and Perfect Picture have both received national attention and very favorable reviews. Linda’s nephew, Josh, is a doctor and also the owner and operator of The Mill in Arlington, Vermont. The Mill is a gathering place for performers of all ilk and produces New York caliber shows. It oftentimes presents previews of what is Broadway-bound.

Both, Josh and Eileen, have been stunned by the ambitious level and quality of the entertainment offered by the Bristol Riverside Theatre. In fact, many of the cast members we’ve met in Bristol have worked with Josh and Eileen.

I urge you, double-triple urge you, to take advantage of this gem. Go to their website and sign up for their emails. You will learn firsthand about the upcoming shows and activities. Take it from this old publisher, you won’t be disappointed.

P.S. This wonderful three-part series of musical performances continues through the summer. We’ll be back on July 12. Maybe you’d like to join us? See you there!!