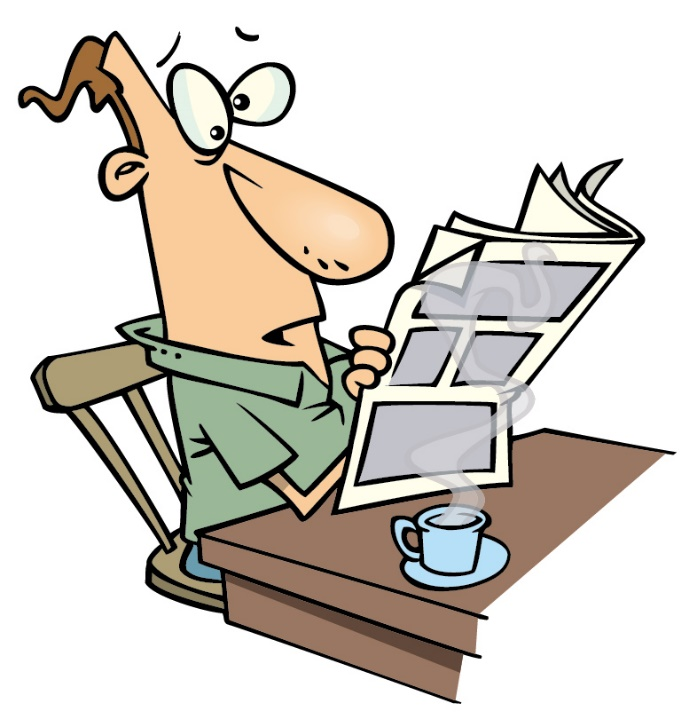 I love the morning papers, but reading them has become more and more upsetting. Same for listening to cable news. No longer can I sit down with juice, a hot cup of coffee and a bagel and just relax and read the morning news or watch cable stations.

I have learned that some Presidential hopefuls want to eliminate cows, airplanes and provide every American, whether working or not, a guaranteed income. The Israelis have become the bad guys and terror groups are now the heroes of some new Moslem members of Congress. Hamburger flippers will get a minimum of fifteen bucks an hour, everyone will get free medical benefits and illegal immigrants will get the right to vote. By the way, I haven’t hit page two yet.

Page two and three are equally “enlightening.” Certain school zones in California have banned the Pledge of Allegiance. Syracuse University is now offering college credits for doing internships with terrorist groups and many school districts throughout our great land have eliminated the bible while introducing courses in the Koran. Temple University has retained an out and out anti-Semitic professor while The University of Pennsylvania has fired a professor who dared to question whether there was a correlation between the reduced criteria for admitting African Americans to their law school and their high failure rating. Coaches have been fired for praying before games and the Star Banged Banner has been eliminated from many sports activities.

Let me be honest. I am more fearful of American educators who I believe are brain washing our kids than I am of ISIS. If you have any doubt of my concern just listen to what some of these screw balls are teaching Also, pay attention to the intolerance they show for those who disagree. They are “house cleaning” our universities.

Dr. Carol Christine Fair, an associate professor in the Security Studies Program at Georgetown, said white Republican senators, specifically Sen. Lindsey Graham, R-SC, who defended Justice Kavanaugh in a fiery speech, “deserve miserable deaths.” She went on to say that they should “castrate their corpses and feed them to swine.” Need I offer any more illustrations?

Allow me to say that most of our Press is no better than our so-called educators. Perhaps they’re even worse. Recently there has been a large amount of information about our Southern border and the number of people who are trying to enter illegally. I will not get into the debate as to what should be done, rather I wish to use the coverage of this ongoing effort to prove my point.

President Trump calls it “fake news.” He is wrong. It is “media manipulation.” CNN was and is very sympathetic towards the “Caravan” of illegal immigrants who are attempting to “crash the border.” They constantly show pictures of ICE agents lobbying tear gas, etc. at whom they call poor “desperate, defenseless,” helpless people. FOX News on the other hand, was and is less sympathetic to this same event. They constantly show images of whom they call young thugs and gang members throwing stones, etc. at the valiant men and women of ICE.

Quite interesting! Two views of the exact same situation. Is anyone right? Obviously, viewers thoughts are heavily influenced by whichever station they watch.

Several months ago, when one of the caravans reached our border, two young children in the group died. It was covered extensively. And I find it really upsetting watching the poor people who are fleeing from organized crime, governmental corruption and gang violence. Every day the papers are covered with pictures of crying mothers, funerals and sheer hopelessness. It is heartbreaking. Small wonder these poor souls are leaving South America and heading North.

But wait a moment! The people I am describing are not from South America … they are living in Chicago. The crime rate is appalling and the small amount of attention being paid to our own youth is unforgivable.

Back to my newspaper… page three has a great article on Hoda Muthana. She’s the former American citizen who traveled to the Middle East to join ISIS. She ended up marrying several fighters, had a child and appeared happy for a while. She’s been busy urging her former American patriots to kill their fellow Americans. Now that ISIS is taking it on the chin, she wants to come back to America. She’s realized she made a mistake. Did this woman ever hear of Tokyo Rose?

On the same page, it appears that actor Jussie Smollett is in big trouble. What I find most interesting about this incident is that Trump supporters were originally reported as the bad guys. That doesn’t seem to be the case now for something that may be declared a hoax.

Finally, on the subject of bigotry, have you noticed that two elderly Jews were beaten up savagely in Brooklyn last month? Probably not. Nor have you heard much about the Knockout Game. But a noose flipped over a tree in Maryland brought two million FBI investigators. And while I’m on the subject, the new Moslem members of the House are horrified by AIPAC’S actions but they are not upset with the black caucus … its views, restricted and segregated membership or the fact that it receives significant funding from the Federal Government. Late last year, five Democrat members of the Congressional Black Caucus took a lavish $60,000 trip to South Africa to see Beyoncé in concert, according to congressional disclosure records. Amazingly, the politicians then tried to claim that the lobbyist-funded vacation was a humanitarian trip. Did you see this story anywhere?

I could go on and on. But I won’t. Instead, I’m going to turn the pages of my newspaper and go to the comics… Check out Pickles. It’s got humor and truth, and I can laugh about real life through the eyes (and drawings) of its creator. And we need, I need, a LOT of laughs. Thank you!! See you next month….