HomeUncategorizedMom Was A Real Character

Mom Was A Real Character 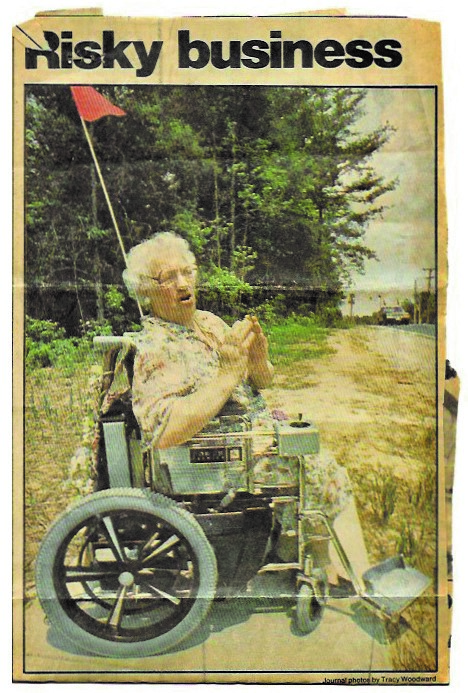 Mom Was A Real Character

Rose Gervase in her wheel chair with the red flag

My mother has been gone for 25 years, but Mother’s Day always sparks memories of her that bring a smile to my face.

In 1983 she was living in a senior citizen complex in Burke, Virginia, a suburb of Washington, D.C. There was a stretch of road between her residence and a small shopping center that didn’t have sidewalks so my mother drove her motorized wheel chair into the street to get to the store. One day, she was pulled over by the police who claimed she was a traffic hazard. They gave her a warning because they really couldn’t arrest a blue-haired 76-year old woman who took safety precautions by strategically placing a bright red flag on her wheelchair. The incident generated a story in the local paper, which prompted the area Agency on Aging into action. A sidewalk extension from the complex to the shopping center was constructed within weeks of the news story.

The police had discovered mom was a world-class baker who would turn out scrumptious confections for them with the ingredients they shopped for and delivered to her apartment. The fix was in. Mom knew how to sweeten the pot.

Another favorite story I tell about her, with embellishments, is the times my mother tried to gas me. Let me set the stage: Lux was the name of a very popular laundry product in the first half of the 20th century. It was deemed safe for delicate items of clothing. Since it didn’t contain lye it would not yellow silks and satins. Lux made a bar soap, too, and both products were used in our household. The distinguished host of Lux Radio Theater was the famous Hollywood director, Cecil B. DeMille. The program was broadcast every Monday evening. It was on my mother’s list of “must-hear radio.” In one hour, a complete condensation of a movie was aired featuring the actual stars of the movie if they were available for the broadcast. Monday was also the night my two older brothers and I got our hair washed in the kitchen sink.

In our home there was an 11th commandment that specified: “Thou shalt not go to bed with wet hair.” This presented a problem during Buffalo’s Siberian winters. There were no hand-held electric blow dryers so Mama had a simple solution. After getting most of the moisture out of our heads with a towel that had all the softness of a Saguaro cactus, she had us kneel in front of the oven door with our heads slightly inside. The heat of the oven finished the drying process. One of my brothers swears she also wrapped tin foil on our ears so they didn’t burn like the edges of a piecrust. The best part was being seated at the kitchen table for milk and cookies so we could listen to “The Lux Radio Theater.”

Mama turned us into movie fans at an early age. One of my favorite movies was “Now Voyager,” a 1942 film that we had seen on the big screen, and then heard on the “Lux Radio Theater” the following year. The movie starred Bette Davis and Paul Henreid.

The film was a boost in morale for me. Paul Henreid’s name in the movie was Jerry. During WWII Germans were referred to as “Jerries,” and I had taken my share of abuse at school. The final scene is pure soap opera melodrama. It contains the famous maneuver where Henreid puts two cigarettes in his mouth, lights them both, then hands one to Bette Davis. It was so cool. Then Davis delivers a line that became one of the most popular movie quotes of all time: “Oh Jerry, don’t let us ask for the moon. We have the stars!” The camera pans up to a fake starry night as Max Steiner’s music soars.

Years later, I tried that cigarette move on a date with Carlotta Gugino. Just as I reached across the table with the lighted cigarette, she leaned forward and burnt the tip of her nose. Had there been an oven handy she would have stuck my head all the way in.

The memories of those times are good ones and remain fresh in my mind. I smile when I think of “The Lux Radio Theater” and those Monday night hair washings, especially the “Now Voyager” presentation. It aired May 10, 1943, the day after Mother’s Day.

So mama, happy Mother’s Day to you. I’m glad that you have the stars. Just so you know, no one makes fun of my name anymore. I still don’t go to bed with wet hair. And if you look closely you’ll see that my earlobes are still a little singed. Thank you for all those great Monday nights. They were a gas.