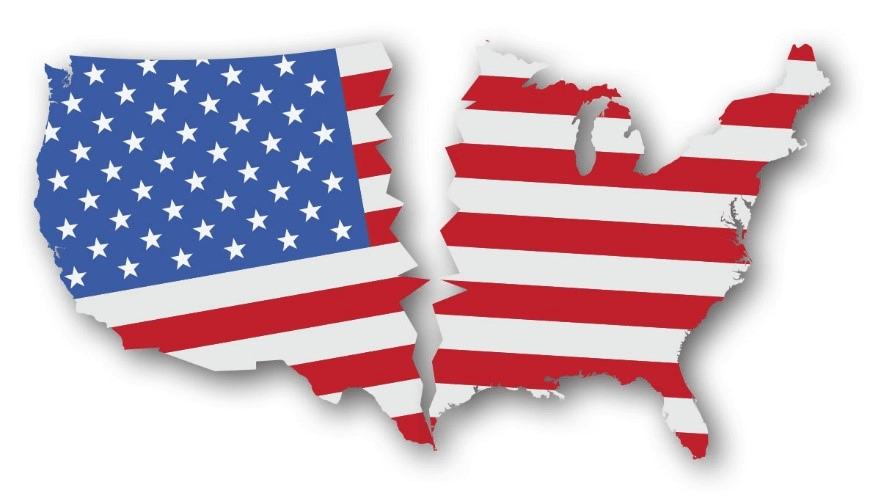 The nation is divided. Half the population is “red” and half is “blue.” Some are conservative and some are liberal. We have Republicans, Democrats, Independents, Non-Aligned, Feminists, Libertarians and Lord knows what other groups. Within each group we have subdivisions. Even with a score card it’s hard to tell who’s who and what’s what. Very confusing. Did I mention scary?

Sad to say, what many have demonstrated in recent years is a total intolerance for the “other guy” and the “other views.” Debate is dead, hostility is everywhere, confrontation is all about us and the situation continues to deteriorate. Quite frankly I have decided to keep my “yap” closed and my opinions to myself … most of the time. It’s safer.

It has gotten so bad that I stopped watching the news. Let’s be honest, the news has become propaganda machinery for people with differing viewpoints on just about every station. You can select which “Goebbels-like” propaganda you want to listen to. I can almost predict a person’s politics by the cable station he or she listens to. People no longer wish to hear opposing views, they want to gather only with people of like minds and opinions. Even the media is divided. Conservatives rule the radio and liberals rule the TV.

I have given up. I no longer have the stomach for it. I really mean this. I won’t watch or listen to any of them. I now watch Alaskans freezing, Texans shooting wild hogs, swamp people in Louisiana whacking alligators, people restoring homes and future business people on Shark Tank.

If I am really desperate. I will even watch Jerry Springer or the Phillies between commercials on the other stations. I also am renting movies and watching reruns of Howdy Doody, Willy the Worm, The Twilight Zone and Mr. Rogers. Anything to avoid Rudolph, Donner, Hannity and Wolf Blitzer. I also am reading more than ever.

Then came Harvey, the hurricane that clobbered Texas and parts of Louisiana. It literally parked atop the city of Houston and delivered record breaking amounts of rain. By the time the deluge stopped the city was flooded with over 54 inches of water. Highways were flooded, bridges washed away, homes leveled and utilities out of order. Many died and over one hundred thousand became homeless. The area suffered terribly and will continue to suffer for a very long period of time.

But there in the middle of all this destruction something wonderful happened. The America I love and remember woke up. Volunteers, first responders, medical staff, professionals, every plain ordinary people of all sorts from all over this great land rushed to help. People in local states came with small boats and pick-up trucks. Some brought their tools and equipment. All were there to help their fellow Americans in their time of need. The parade of small boats cruising the flooded streets reminded me of the movie Dunkirk.

People of all colors, of all religions, short and tall, fat and thin, rich and poor and all political persuasions were on the scene almost instantly. A doctor, a democrat from Maryland, wrote in the Journal how he was transported in a power boat owned by a volunteer with a Trump banner. It was, and remains a wonderful sight. Still, another well-educated nurse from Boston spoke of “Pick-Up Joe” who bragged about how he was the first member of his family to graduate high school as he helped her treat people who were ill. They all were, from all over the Land, there to help their fellow Americans.

Quite honestly, it restored my faith in this great nation. I once again believe we will overcome our collective problems and, at some point, move forward. The Melting Pot still works. It just has gone unnoticed.

Just as I was finishing this article I stopped into the Persian Grill in Hatboro to review their ad. When I got there, I spotted several utility trucks. I assumed there was a serious problem. In fact, the number of trucks indicated a very big problem.

There was no problem! The seventeen men in the four trucks were as diverse as the group I have just described in the paragraphs above. They had stopped to pick up some food for the road from their favorite restaurant that was close to the PA Turnpike. They were Linemen on their way to Florida to help with the coming storm. All were leaving family and friends for up to three months to help. It was a great sight to see. In some ways, it reminded me of the 911 Tragedy and the people who lined the roads to New York City to cheer the rescue workers who were willing to brave all to help.
When I got home I turned on the news. I was proud, I was happy, my faith was restored. I was delighted to see the various stations that continued to cover the people who were coming together to help the victims of these two storms. Congress and the President was doing their share and the public was contributing to various charities. I wanted to watch and watch.

All the major networks were there interviewing, reporting and urging people to continue helping. And they continue to give the situation the coverage they deserve. Radio stations also were highly effective “disaster media.”

If I had one disappointment it was CNN’s continuous hammering at the President and his wife in the middle of the disaster. He and the Vice President were there to help. Even Congress did it right. And while these success stories unfolded CNN gave a massive amount of coverage to the high-heeled shoes that Mrs. Trump was wearing. They also had a large panel discussion about whether the President was sincere or if his smile was fake.

Come on guys. It’s obvious you are not “Trumpeters” but give the guy a break. There are more important issues. Let’s give ALL who contributed help applause. Even a broken clock is right twice a day.

Allow me to close with several lines from the
Blue Bird of Happiness. It is dedicated to our fellow Americans who are suffering through this terrible ordeal.

And when he sings to you
Though you’re deep in blue
You will see a ray of light creep through
And so remember this, life is no abyss
Somewhere there’s a bluebird of happiness