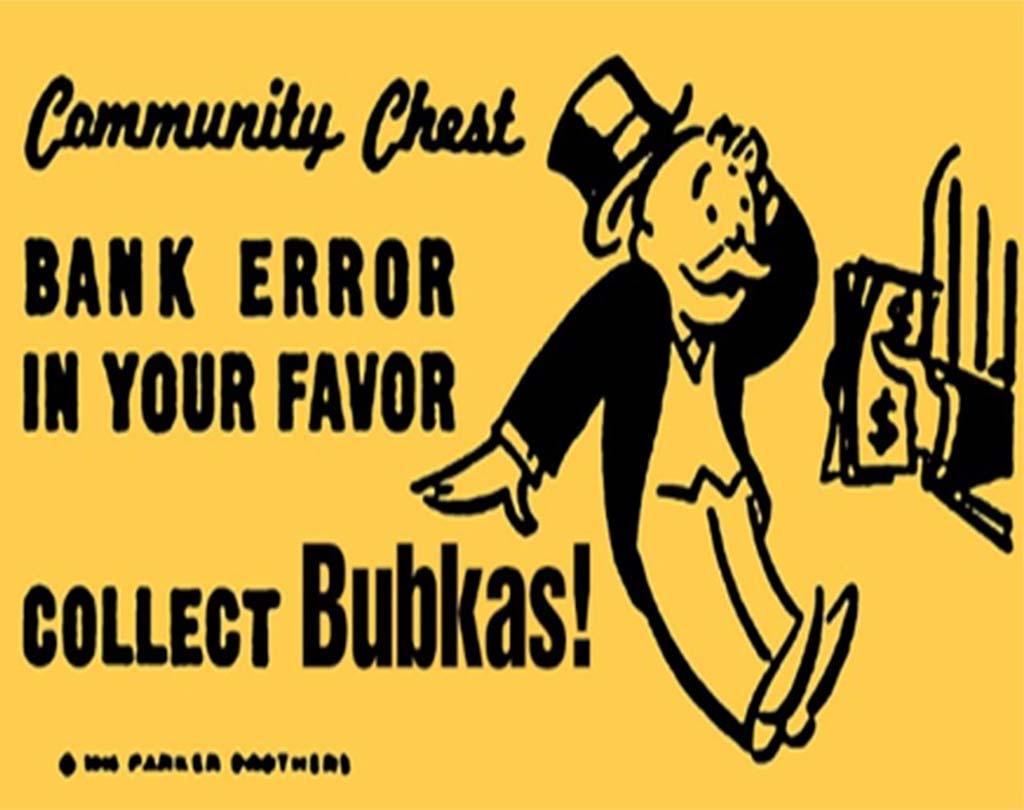 Top Definition: bubkas. squat, not much, not a whole lot, not what you deserve, a small quantity. Bubkas!

Recently our bank goofed. I have no idea how or why but they mistakenly entered one of our deposits into another person’s account. As a result three of our checks to separate credit card companies bounced … and bounced again.  We discovered the problem when we returned from vacation. Each credit card company, after having the checks returned, hit us with a thirty eight dollar late fee and a thirty dollar fee for the “bouncers.”  The total reached almost two hundred and twenty bucks. Ouch!

The moment Linda and I spotted the problem we went to the bank and had a brief “discussion.”  At first we were treated as though we were “special needs depositors” who had to be humored. When we produced the appropriate deposit slip and a copy of our statement clearly indicating that the deposit had not been registered, their mannerisms changed instantly. We became the Einsteins of the banking world who had to be dealt with.

They had goofed. For once the Hermans, not the bank, were right. Whoopee!  They acknowledged that the error was theirs and stated that they would immediately notify the credit card companies involved and make certain that our credit was in no way impacted. They also were going to remove all of their fees as well. How charitable!

I made it known that I was happy with their actions and considered the matter closed. But I expected, as promised, that they would send the letters to the credit card companies and have their records corrected and have them remove all penalties and fees.

Still, I felt it only fair that our bank should issue us an amount of money equal to what they had charged us for what originally was thought to be our error. In the strictest of non-financial terms, “what’s good for the goose is certainly good for the gander.” They were hilarious. I was the funniest human being they had ever met. They laughed so hard they almost fell out of their chairs. I didn’t laugh. I was serious. If I erred it was I who would have to pay. Since they had erred, I believed, and still do, they should pay.

I got bubkas. Nor did I get any satisfaction from the credit card companies.  I questioned why they hadn’t charged the bank the very same fees I had been hit with when I was presumed guilty. More laughter, more suggestions I go on stage. I was told I was a very funny guy. But other than laughs I got no satisfaction, I got bubkas.

But the situation doesn’t stop there. Recently I was unable to make a flight to Seattle. I had not purchased flight insurance and realized I would not recover any money. However, as I was unable to use the seat, I asked the airline if I could give the seat,  which I had already paid for, to my nephew. More laughter and more bubkas.  Since I, myself, could not use the seat, the airline intended to re-sell my paid-for seat to someone else.

Quite honestly, I didn’t and don’t get their logic. If I have movie tickets or football tickets or seats at the opera I can always give them away or sell them if I find I can’t use them. I can even “scalp” them if I don’t get caught. Why do I not have the same privilege with my airline seat? And while I am in the “Y” mood, why do banks charge me a full month’s interest if my purchase was made the very last day of the billing cycle. Why do they give us less than one percent interest on our savings and then charge people over twenty percent when they borrow the same money? I don’t have to tell you that these questions make me the comedian of the year.

Four years ago, Linda and I purchased a shiny, brand new, repeat brand new automobile, from a local dealer. Some three years later when Linda was involved in a semi minor fender bender we were informed that the shiny new car we had purchased had not been so shiny new. The car had extensive repairs to the rear and undercarriage. To make matters worse, all of the replacement parts were Chinese products that did not meet the auto maker’s standards.

Obviously Old Al was not a happy camper. I went to the local agency to “discuss” the issue. No one in the entire organization would talk to me. The showroom emptied and the salesforce disappeared. Finally, the owner of the agency was notified of the situation by his friend who, as fate would have it, owned the repair facility. He was told that I was the owner of a magazine that went to over fifty thousand mail boxes. Further he suggested that I was a total nut who could and very possibly would discuss (expose) this crooked dealer to all two hundred thousand readers. The owner of the agency finally gave me a call.

I was informed that the damage to the vehicle had been done during transportation of the vehicle from the factory. The “hauler,” who had no obligation to inform the dealer, had the car repaired prior to delivery. Further, the innocent lambs at the agency … my words … had never noticed or realized what had been done. After all, all of the replacement parts were on the undercarriage and rear bumper.

Let me shorten this sad tale with a simple sentence. The firm and the manufacturer offered us bubkas! We were never even able to get the name of the hauler. Bubkas!

I don’t quit easily. I went to a lawyer (our son was still in law school) and reviewed the situation. He gave me a long exhaustive answer which basically said that it would be a mistake to pursue legal redress. It would be very costly and in the end I would get bubkas.

You know, sitting in traffic can be very, very boring. Last month, when I was stuck in a “wallapalooza,” I tried to maintain my sanity by thinking of dumb things to kill time. After wondering which female politico would make a better mother-in-law,  I turned my attention to bubkas. When I turned my attention to this issue I came up to a profound conclusion. Our beloved elected officials should address these issues. Americans are getting screwed out of millions of dollars … maybe more … every year.  Let’s face it, businesses and financial institutions have figured out more ways of screwing us than can be found in the Kama Sutra.

Instead, sad to say, I believe they are doing bubkas. Maybe this time around things will be a little different.

Another Letter From the Left Coast